When someone begins to take a statin drug, he/she will probably take the medication for LIFE. Imagine the economic implications associated with this – for both the patient and the pharmaceutical companies. I’ll give you a personal example:

My husband’s endocrinologist has been trying to persuade him to take a statin drug for years (see previous post). In lieu of a statin, we walked out of his office with a prescription for Niaspan (extended-release niacin tablets). 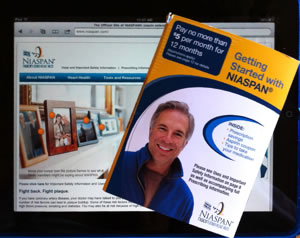 Before we left his office, the doctor kindly gave us a few samples and an expired offer from Abbott Laboratories containing a card that allows us to obtain the drug for $5/month (certain conditions apply, i.e., if my husband registers to an educational program that supplies him with their product literature). The doctor suggested that we call Abbot laboratories and ask them if they would honor the offer, so we called the company. They agreed to send us a new card in a few weeks. In the meantime, we took the prescription to the pharmacy and were astounded when our co-payment (after insurance) was $70.01. We inquired as to the retail price of the drug and were told that the retail price was $75.99.

As it happens, consumers now may not be able to shop around for the best prices for medications because the pharmacist doesn’t have any idea what the co-payment amount is until AFTER they have filed the claim with the insurance company. By that time, the prescription has been filled. To provide you with a cost comparison, a pharmaceutical grade, non-prescription, sustained release Niacin retails for approximately $11. I know there is a difference between extended release and sustained release, but it shouldn’t be so much that the cost would increase sevenfold.This is for a vitamin, for goodness’ sake!

I called our insurance company to find out about the co-payment amount and was told that the actual co-payment for the prescription is really ONLY $50, but since we had not yet met our yearly deductible amount, our cost was $70.01. As a consumer, I would have no clear way of understanding this without spending a lot of time on the phone with the insurance company, since there is no itemized statement provided with a breakdown of the costs.

What is the real cost of the drug? Why is Abbott laboratories so eager to give the drug to new patients for the first year at $5/month? Who subsidizes the $5/month offer to new patients? How can consumers be better represented in this process?

Niaspan, at a retail cost of $75.99/month, easily earns the drug manufacturer approximately $900/year per patient. This medication (which is a VITAMIN) is being prescribed to thousands of patients, who will probably have to take the drug for many years (or for life).

So who really wins?

My guess is that the real winner here is the Pharmaceutical Company.