Ginger has been used for centuries. It was used by the Greeks as early as 4400 years ago and by the Spanish in the 16th century. It is spicy, yet soothing and is an easily recognizable ingredient in Oriental cuisine.

Ginger is widely used in cooking and in the healing arts, as it is a safe and effective herb that:

Chef’s Tip
Add 1 slice of peeled fresh ginger into a marinade for every lb. of meat or poultry.

Ginger is easily available fresh, powdered, or in dry pieces. To store fresh ginger, it should be refrigerated. If it is wrapped first in a paper towel and then wrapped tightly in plastic, it will keep for weeks or months. 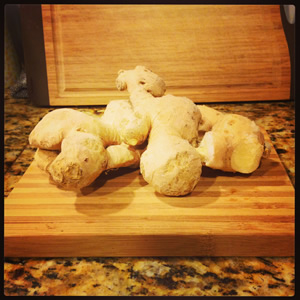 Glenn’s Tip
Keep fresh ginger frozen until it’s ready to use. Peel it if it is not known to be organic.

Ginger is a mild stimulant which promotes circulation. On a cold day, ginger tea can warm and invigorate you. If you don’t feel like grating the ginger, just pour the boiling water on top of the rhizome. The tea won’t be as strong that way. You can sweeten it with a bit of honey or stevia. If you’re really adventurous, you can add a bit of grated fresh turmeric root to the tea. That will increase the anti-inflammatory properties of the tea. Cheers!!!