(This article appeared in the December, 2010 issue of A Healthy You.) 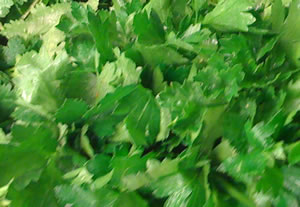 The leaves of the coriander plant are called Cilantro. It is also known as Chinese Parsley. It is a sweet and fragrant herb that has been used medicinally in many cultures for many years. It is also a very good source of dietary fiber.